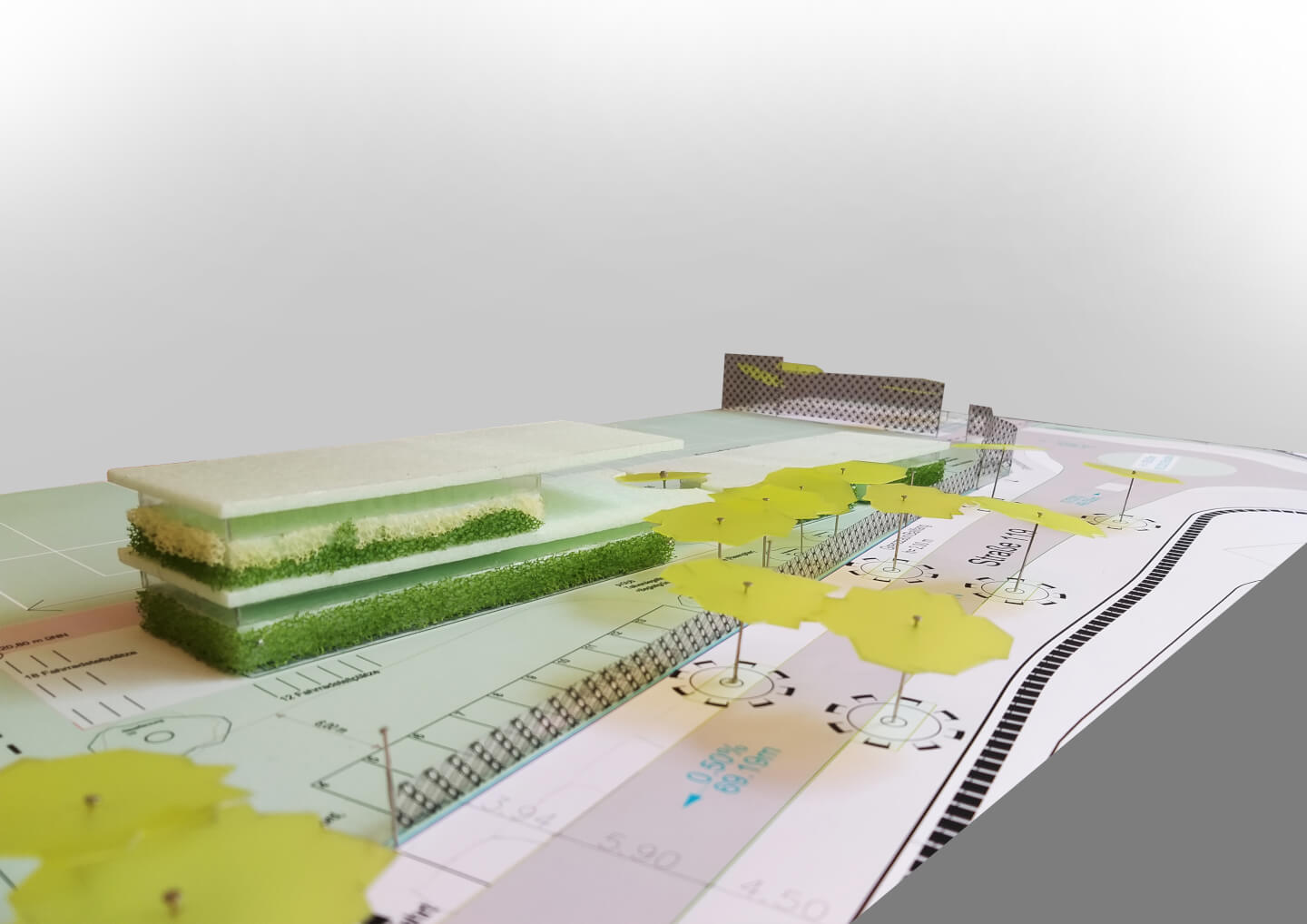 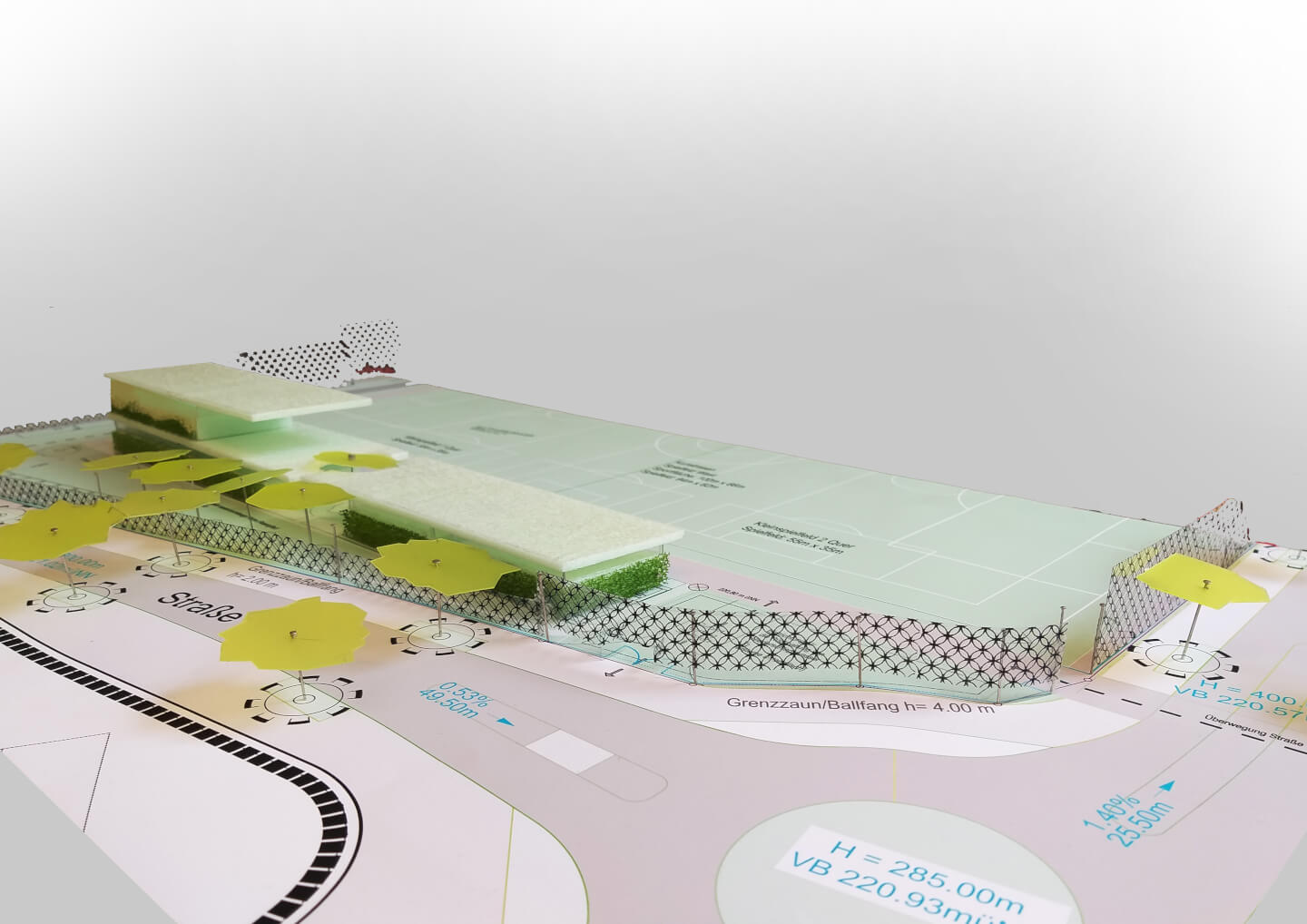 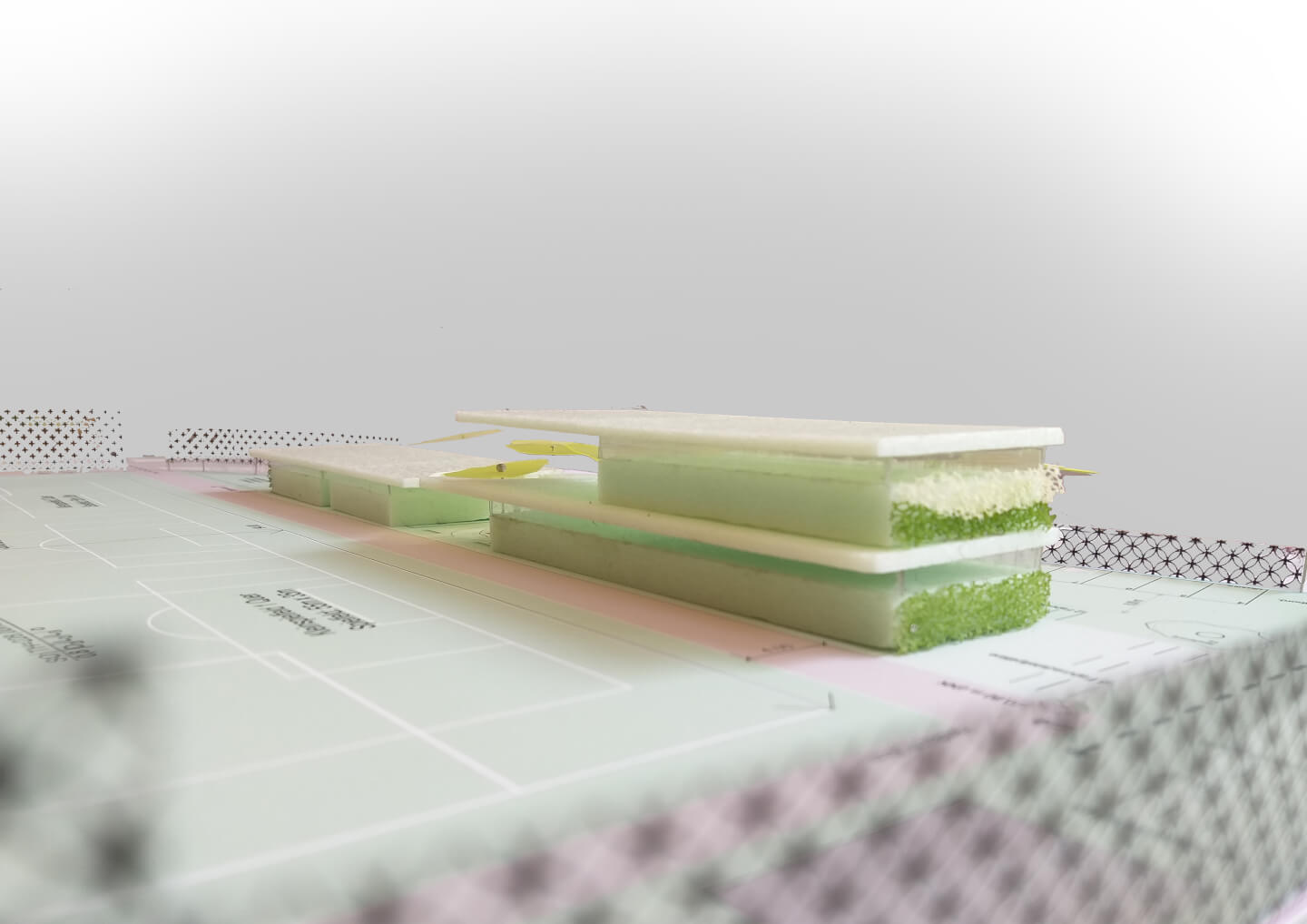 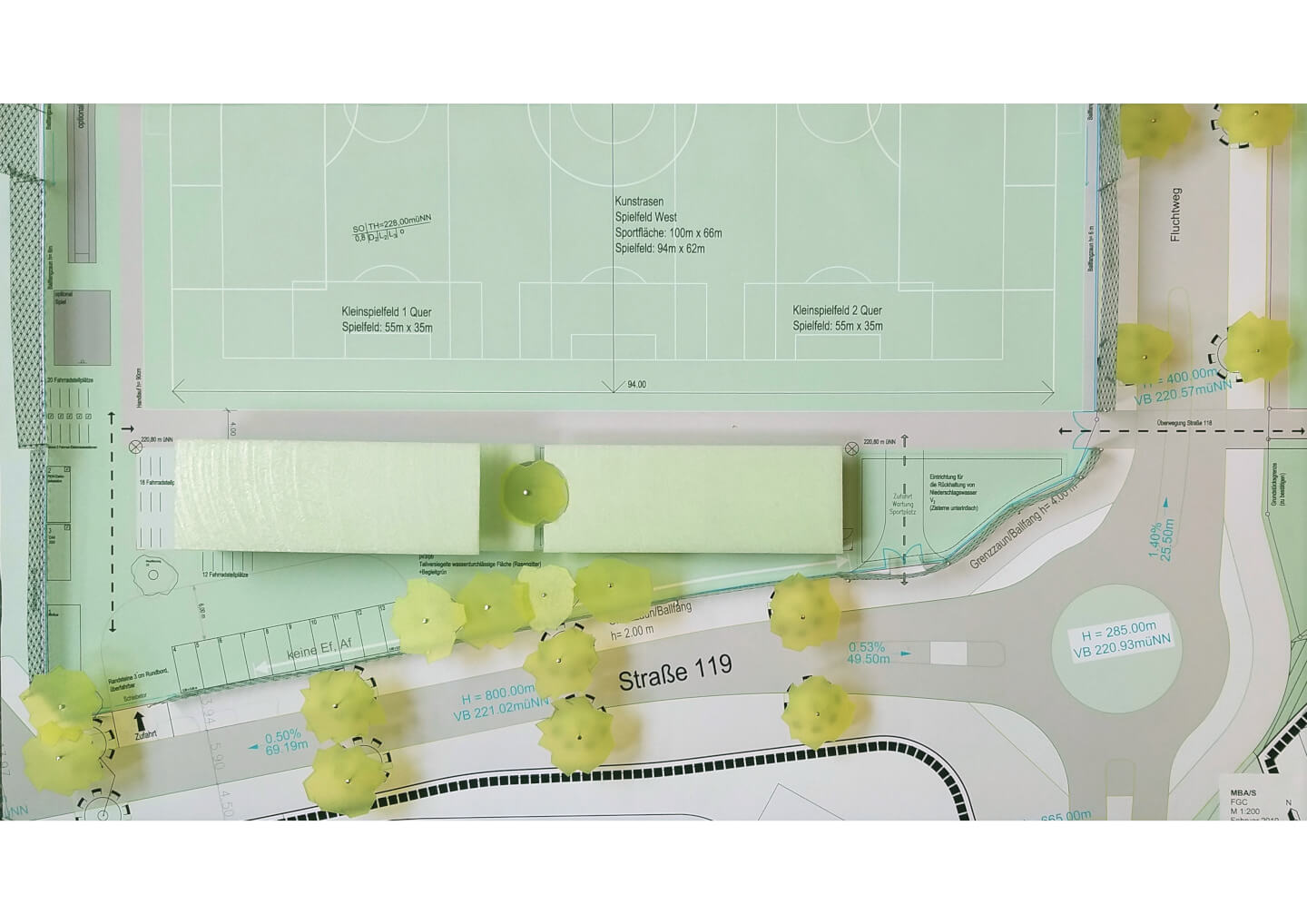 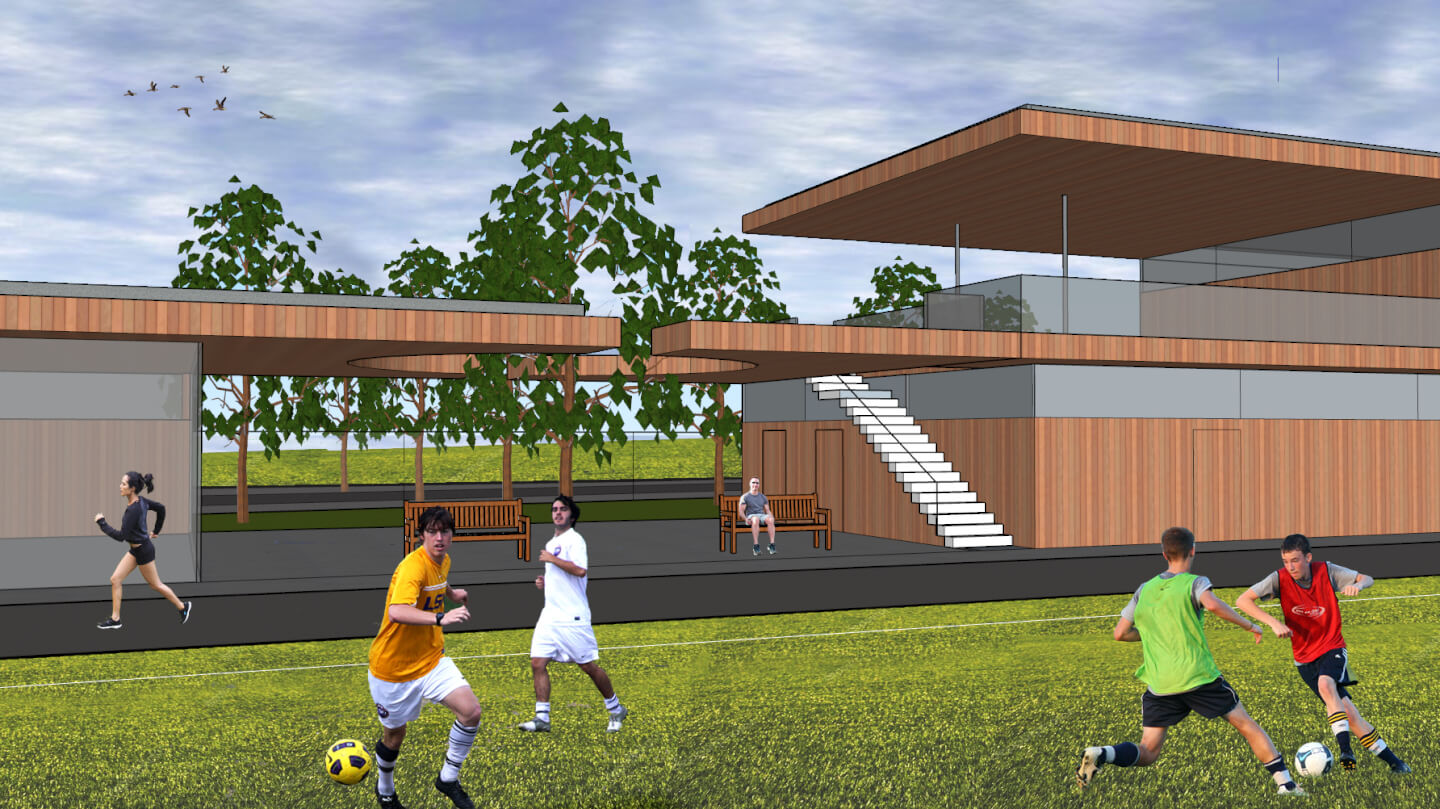 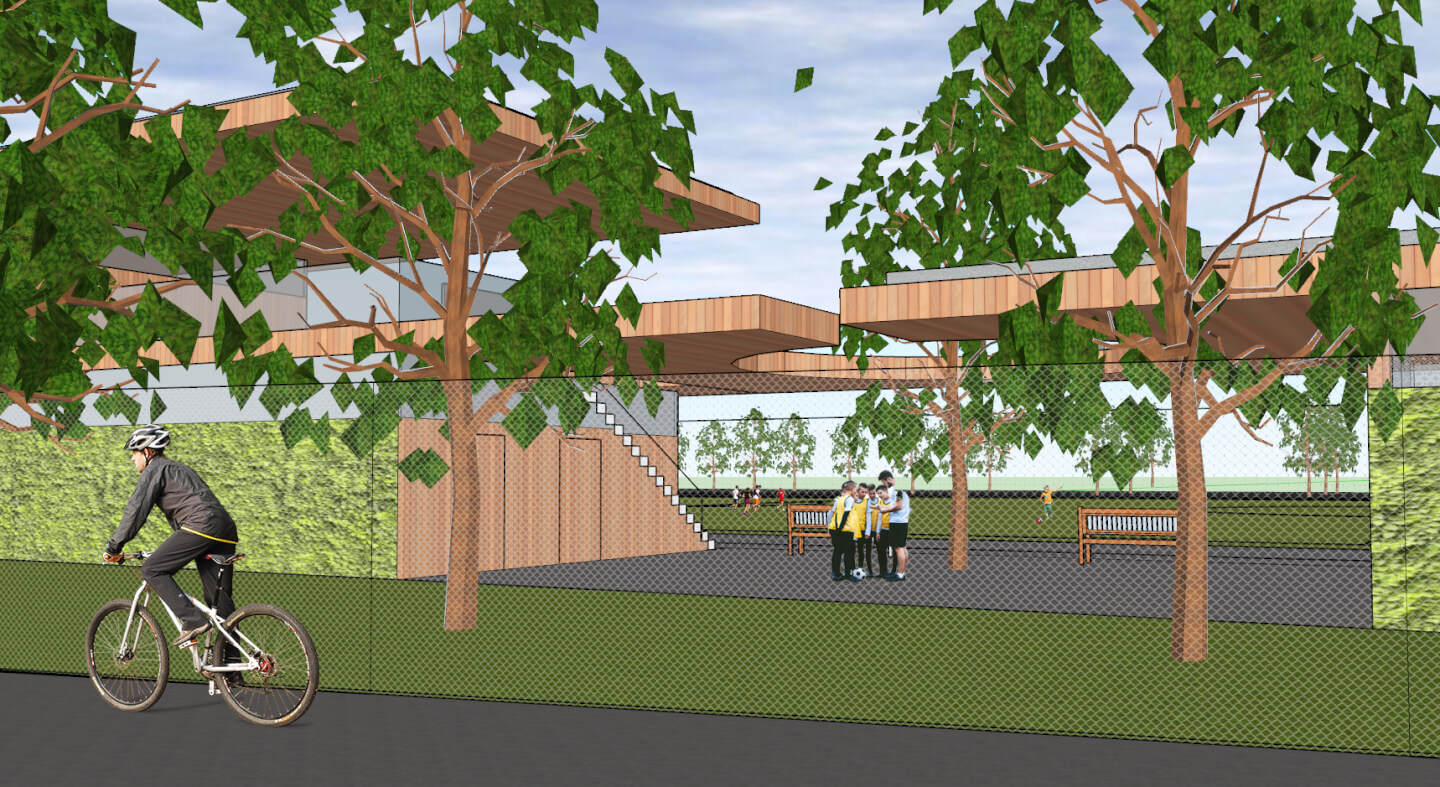 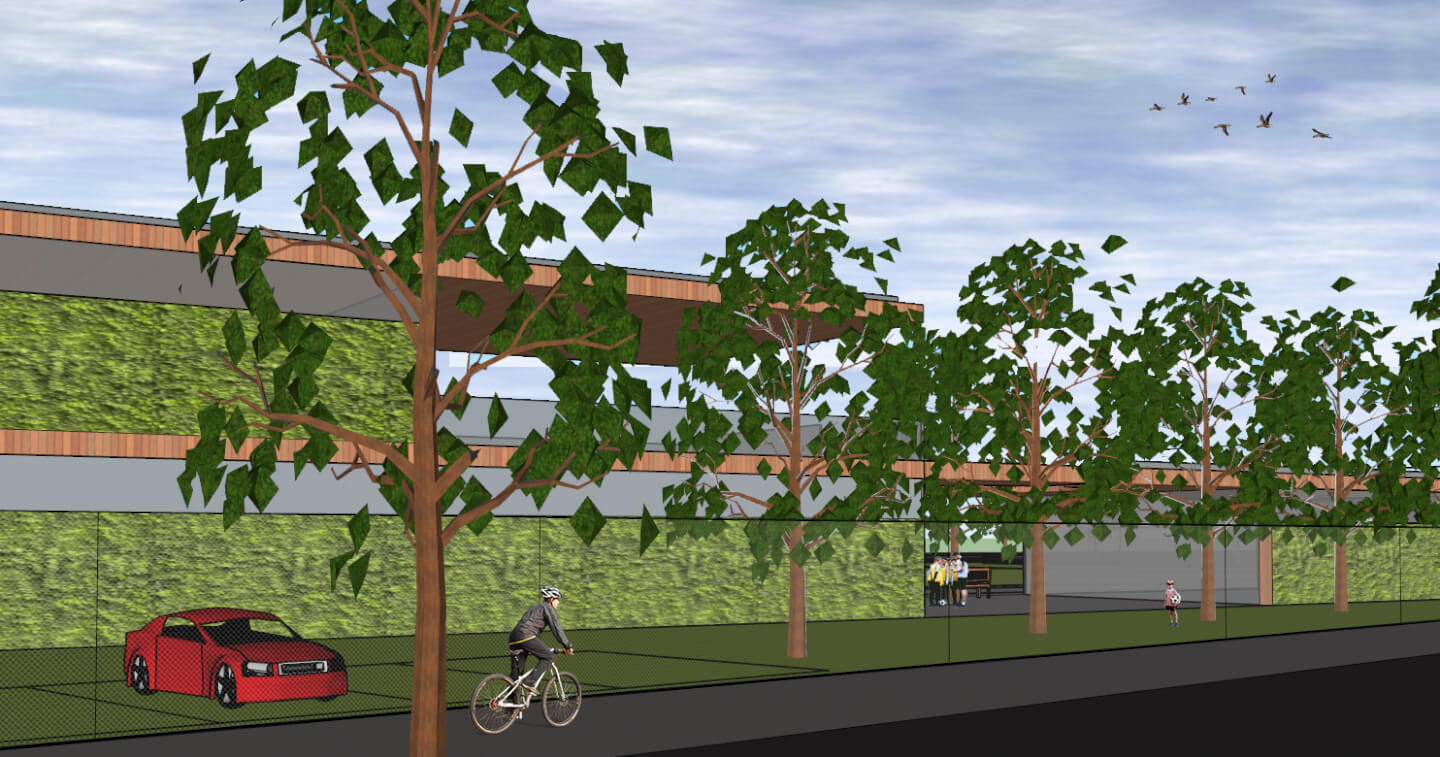 On the site of the former freight yard in Bad Cannstatt, a new quarter with apartments, commercial areas, parks, squares and the associated developments is being built on an area of about 22 hectares.For the district, new artificial turf pitches are to be built in conjunction with a new functional building. Following the specifications of the development plan, the functional building building is a long, narrow and programmatically divided structure into three parts, which according to the main usesChanging rooms, meeting and Lager/technic.In the West are the changing rooms for the sportsmen. In the shortest way, they reach the four barrier-free changing rooms, which are located on the ground floor, from the parking spaces for bicycles and cars, including a changing room with an accessible shower. Each changing room is designed for up to 20 sportsmen‘s athletes.Upstairs are other changing rooms, which are accessed via a staircase from the central and partially covered open space.Due to the added value of the covered terrace upstairs, spectators as well as coaches and athletes can view the sports field from a higher perspective.The focal point of the building complex is the partially covered free area with lounges for the athletes, coaches, supervisors and spectators, even at festivals.Adjacent to the east is a generously glazed crew meeting room with a tea kitchen, combined with a subsequent multi-purpose room.The eastern finish of the functional building is used to store equipment for the sports fields, the technical room and space for dumpsters. Due to the orientation of the bearings, the sports equipment is easily accessible for both the western and the eastern playing field.In the open space adjacent to the east is an underground cistern that collects surface water and for irrigation of the outdoor facilities, the façade greening and also the extensive roof greening (under photovoltaic system).The aim of the design is to create a functional building for the New Sports Places Neckarpark, which is not only functional according to its uses, but also promotes the community experience and a suitable and pleasant place as a focal point for all Athletes, companions, supervisors, trainers and spectators.
The function building and meeting place of the athletes give staggered roof surfaces and openings for views an open, inviting and clearly structured structure. An circulating window band underlines the effect of the protruding roof windows and ensures natural ventilation, exposure and orientation even inside the functional building. In solid wood construction, possibly in combination with recycled clay bricks, a CO2-neutral building with green facades, extensively green flat roof and a PV system is being built. An orbiting roof overstand of 50 cm provides constructive wood protection and encompasses the green facades in the south and west. The heating is carried out via the local heating connection in the northeast with radiators. The unrenovated building is not constantly used but all year round and is created beyond the requirements of EnEV as a low-energy house that is as self-sufficient as possible, with natural ventilation and ventilation. In the changing rooms and showers, mechanical ventilation and ventilation are provided to ensure the necessary moisture removal.

This website uses cookies to improve your experience while you navigate through the website. Out of these, the cookies that are categorized as necessary are stored on your browser as they are essential for the working of basic functionalities of the website. We also use third-party cookies that help us analyze and understand how you use this website. These cookies will be stored in your browser only with your consent. You also have the option to opt-out of these cookies. But opting out of some of these cookies may affect your browsing experience.
Necessary immer aktiv
Necessary cookies are absolutely essential for the website to function properly. This category only includes cookies that ensures basic functionalities and security features of the website. These cookies do not store any personal information.
Non-necessary
Any cookies that may not be particularly necessary for the website to function and is used specifically to collect user personal data via analytics, ads, other embedded contents are termed as non-necessary cookies. It is mandatory to procure user consent prior to running these cookies on your website.
SPEICHERN & AKZEPTIEREN